The basic principle of veneer drying？
Veneer drying is the process of drying the rotary cut wet veneer to a certain moisture content according to the process requirements.
The significance of veneer drying？
The moisture content of the veneer after peeling is very high, usually %60-%70. If the veneer is directly glued without drying, and then the veneer is hot pressed, when the veneer is glued, it is easy to produce due to too much moisture. Glue infiltration makes the glued surface of the veneer lack glue; during hot pressing, it is easy to produce bubbling, degumming, and glue penetration on the board surface; when the plywood is used, it is easy to produce defects such as degumming, deformation, and surface cracks. In addition, if the moisture content of the slab is too high, the hot pressing time of the hot press will be prolonged and the productivity of the hot press will be affected. Therefore, the veneer after peeling must be dried in a veneer dryer to make the veneer meet the requirements of the plywood production process

The basic principle of veneer drying？

Veneer drying is the process of drying the rotary cut wet veneer to a certain moisture content according to the process requirements. 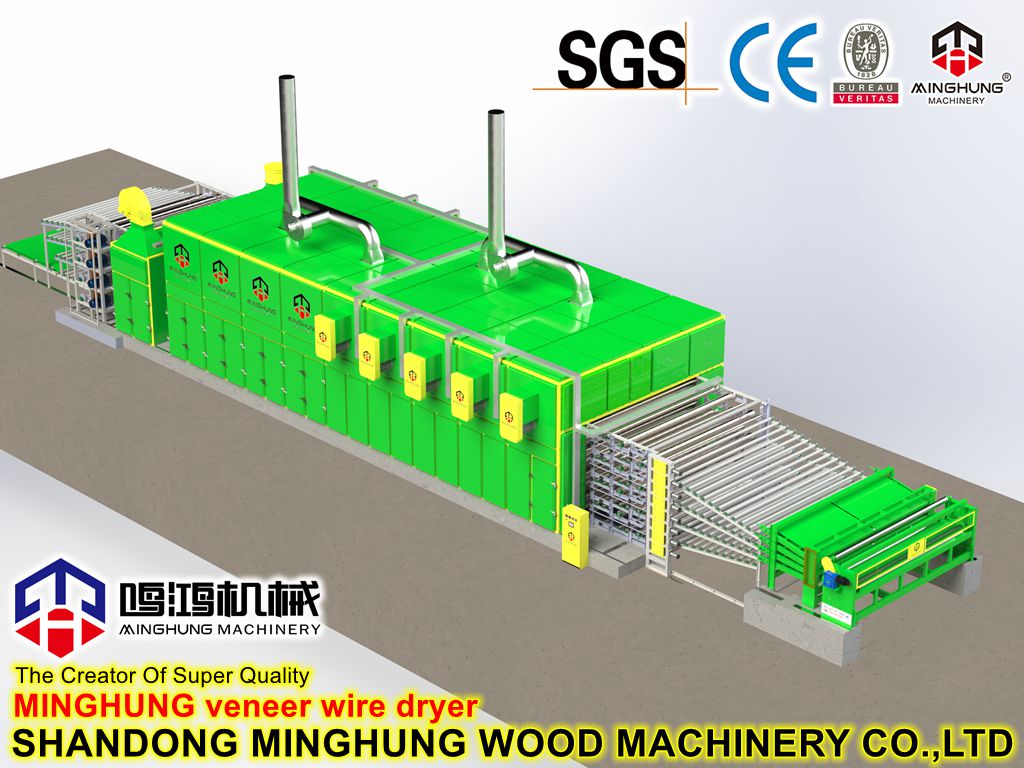 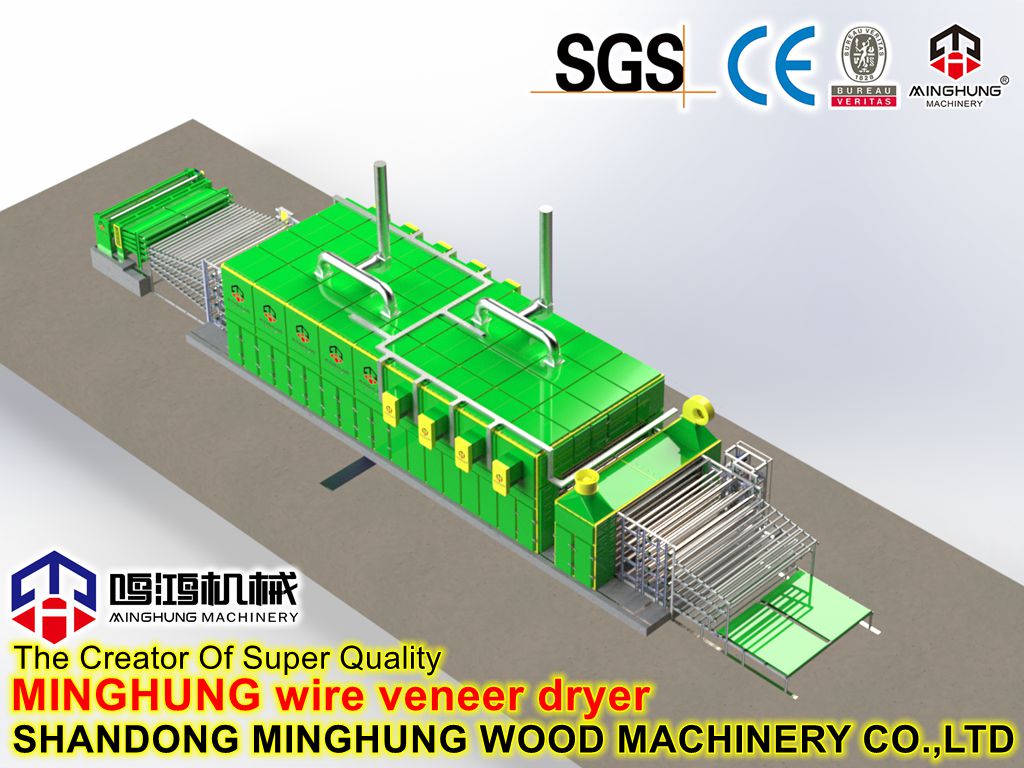 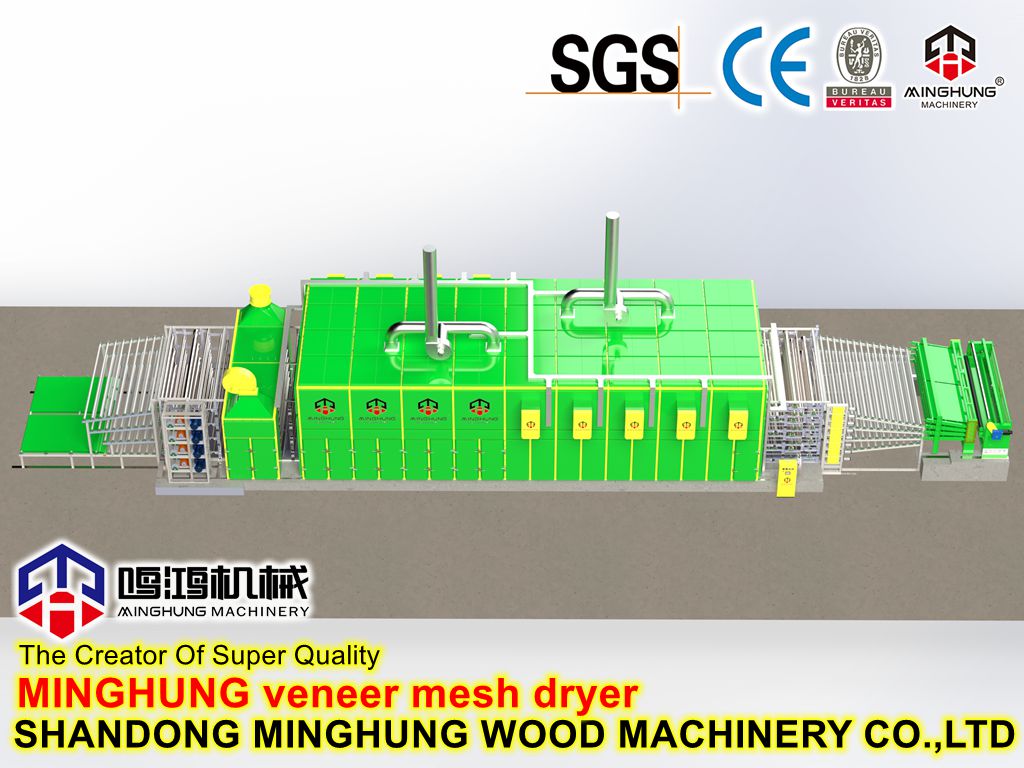 Veneer drying is the forced evaporation of moisture by heating. When a veneer with high moisture content is convectively heated under certain conditions (air temperature, humidity, and wind speed), the relationship between the temperature, drying speed and time of the veneer.

The veneer drying process is divided into three periods.

When the temperature of the veneer rises to the dew point, the surface moisture begins to evaporate，

The temperature continues to rise, and the moisture on the surface of the veneer evaporates into the air through the critical layer, causing the capillary pressure difference between the surface and the interior, forcing the free water inside to move toward the surface. Due to the small resistance of free water movement and the severe drying conditions, the evaporation of water is large. The rate of evaporation of water during this period is roughly equal, so it is called the constant rate drying period.

The water evaporated on the surface is mainly supplemented by the capillary conduction near the surface. With the extension of the internal water conduction distance, the resistance becomes larger and larger, and the evaporation rate is consistent with the water diffusion rate in the wood for a short time. Therefore, the constant speed drying period is also very short.

This period can be divided into the first and second stages of deceleration. In the first stage, the temperature of the veneer is generally maintained at the wet bulb temperature, and the speed of the internal water movement begins to be lower than the surface evaporation speed. Part of the surface is dried to below the fiber saturation point. As the drying progresses, the internal moisture diffusion resistance increases, and the drying speed of the veneer gradually decreases. At this stage, the free water has been evaporated, and most of the absorbed water has also evaporated, which is the main stage of veneer drying. In the second stage, the remaining water in the veneer absorbs water, because the shrinkage of the dimensional capillary becomes smaller, which makes the movement of water more difficult, and basically the movement of the steam state is mainly. At this stage, in addition to evaporating moisture, the heat supplied by the hot air also increases the temperature of the veneer gradually until the dry bulb temperature.

In order to balance the moisture content of the veneer and facilitate the production and use of plywood immediately, the veneer needs to be cooled by a fan system that absorbs and exhausts heat. 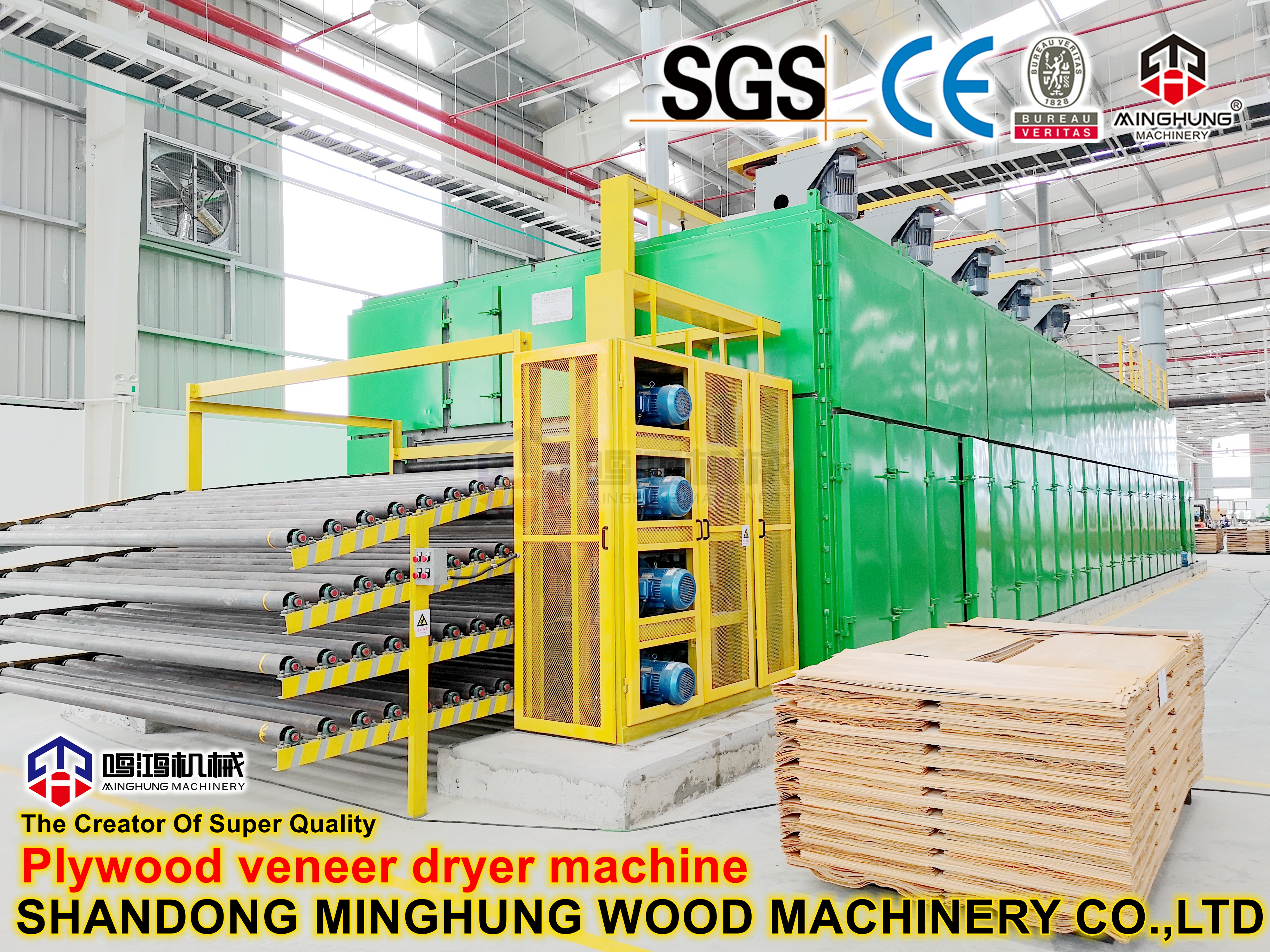 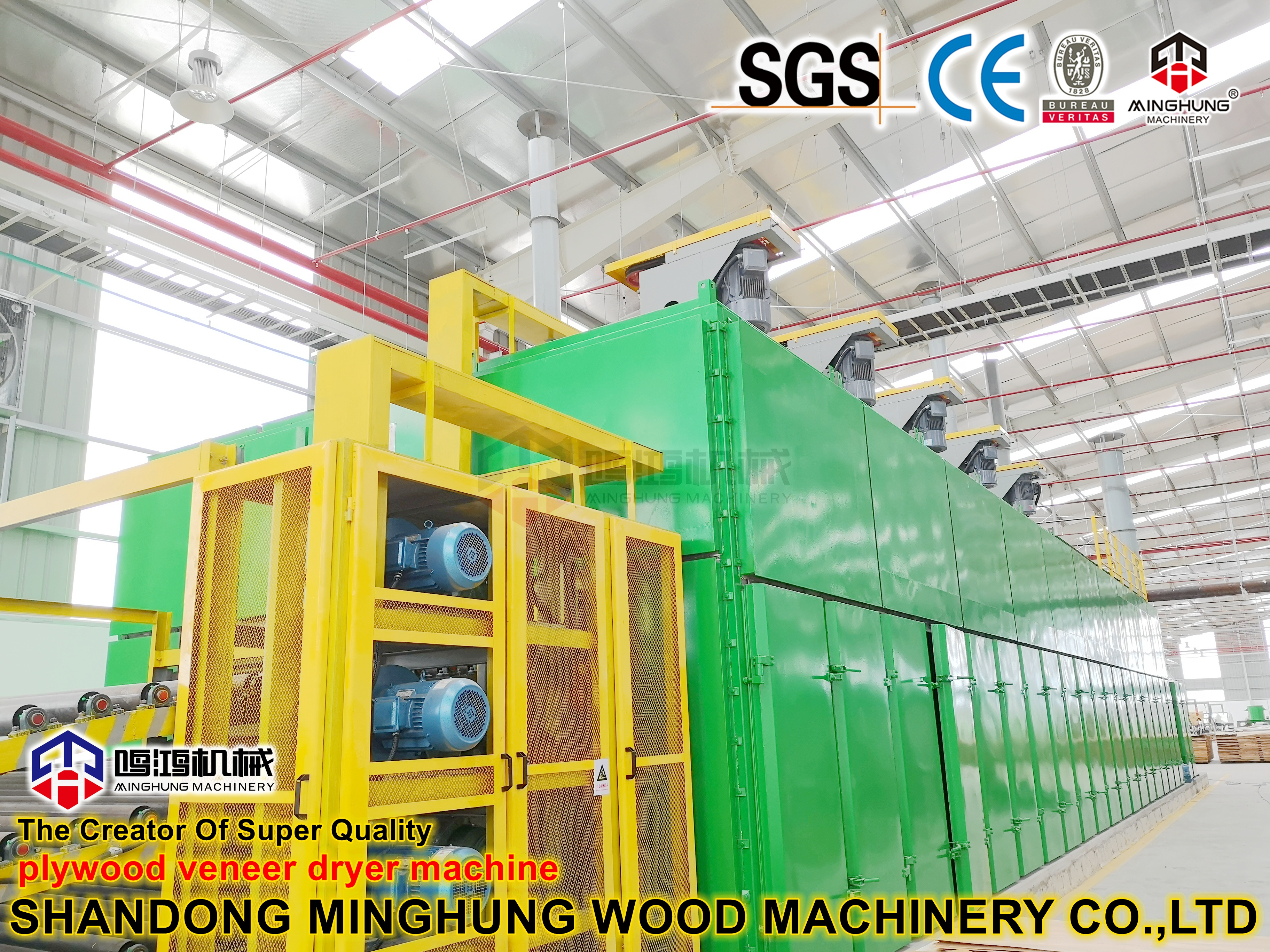 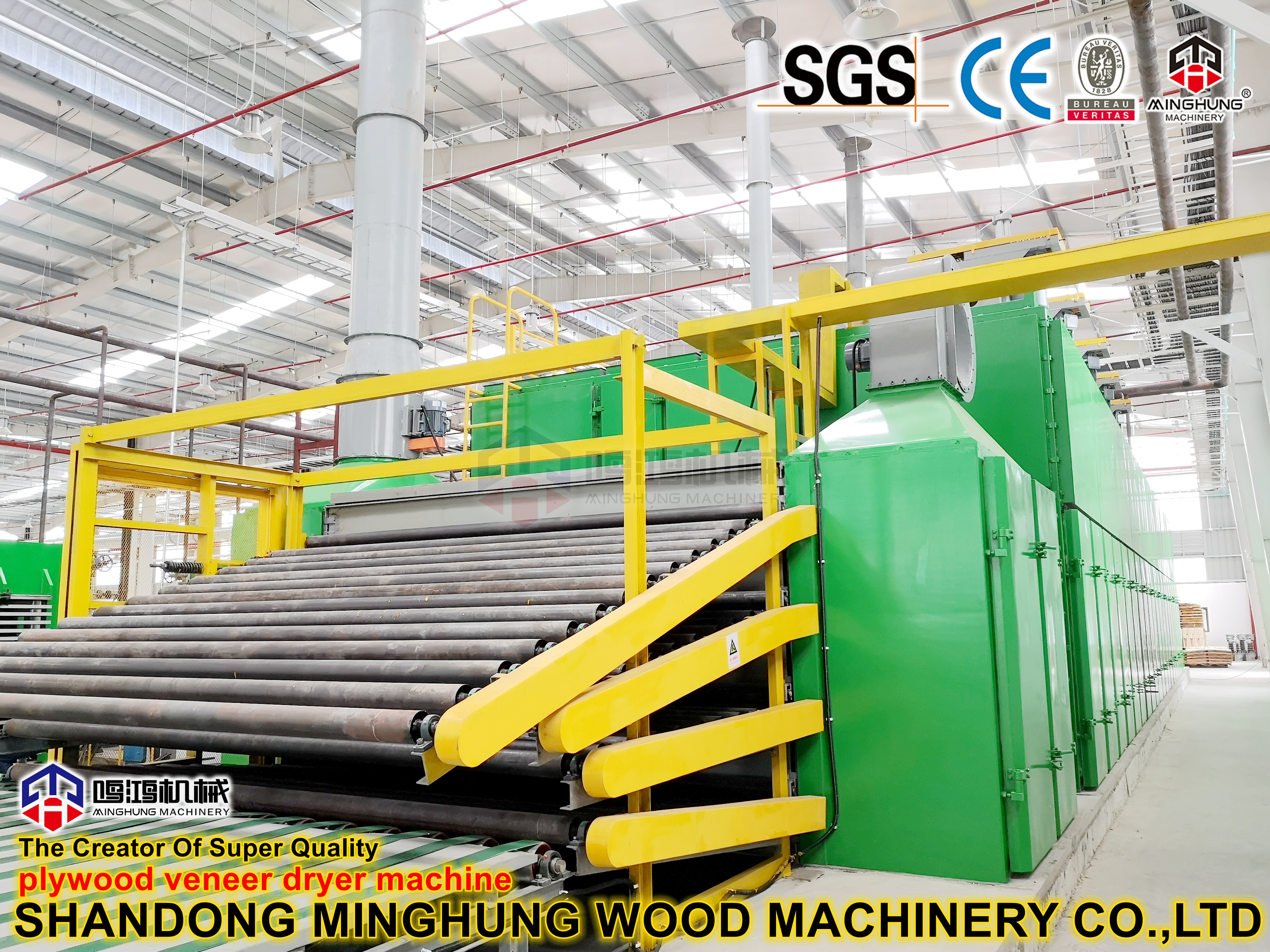 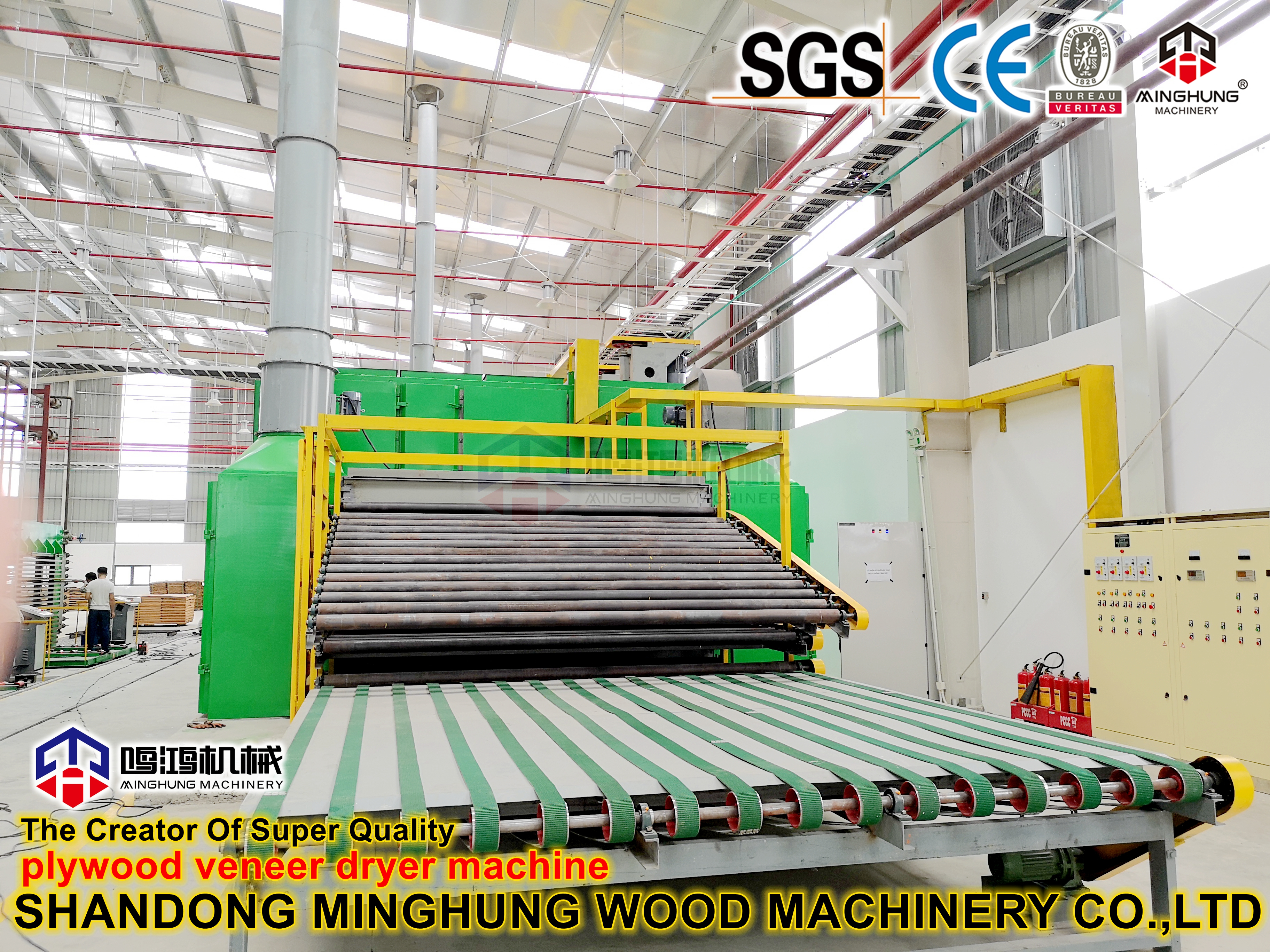